Project will be first new Coca-Cola plant built in the U.S. in a decade 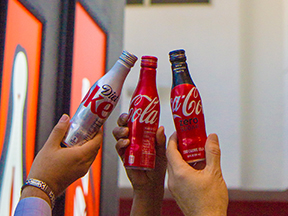 Houston, Texas, May 30, 2018 – Coca-Cola Southwest Beverages (CCSWB), a company of Arca Continental, announced today that it will construct a new production and distribution facility in Houston, Texas.

Upon completion of the project in Q1 2020, the 1 million-square-foot, state-of-the-art facility will include manufacturing with 5 new production lines, distribution, warehouse and sales which will enable CCSWB to even better serve the Southeast Texas market.

“This significant investment confirms Arca Continental’s commitment for the sustainable creation of value in all the markets we serve and is a reflection of the confidence in our company’s ability to continue perfecting its performance, serving its customers with excellence and anticipate the needs of consumers,” stated Manuel L. Barragan Morales, Chairman of the Board of Directors of Arca Continental.

“Coca-Cola has a long, rich history in Houston,” said Mark Schortman, president, Coca-Cola Southwest Beverages. “As a local bottler, we’ve been serving customers, consumers and communities in Texas for more than 100 years. We are committed to supporting future growth in the region, one of the fastest-growing markets in the U.S.”

“The productivity, efficiency and sustainability that this new plant will bring to beverage production in the U.S. Coca-Cola system, confirms our company’s determination to improve its competitiveness, service at the point of sale and expansion of our portfolio always in a profitable and sustainable way,” added Francisco Garza Egloff, Chief Executive Officer of Arca Continental.

The world-class design will enhance operations in the Southeast region of Texas by consolidating production from two of the company’s legacy facilities and four distribution centers in Houston.

More details about the announcement are available here from Arca Continental.

Arca Continental is a company dedicated to the production, distribution, and sale of non-alcoholic beverages which are brand names of The Coca-Cola Company as well as salty snacks under the brands of Bokados in Mexico, Inalecsa in Ecuador, and Wise in the United States. With an outstanding track record of more than 92 years, Arca Continental is the second largest Coca-Cola bottling company in Latin America and one of the most important in the world. Within its Coca-Cola franchise, the company serves a population of more than 119 million in the northern and western parts of Mexico as well as Ecuador, Peru, the northern region of Argentina and the Southwestern U.S. Arca Continental is listed on the Mexican Stock Market under the ticker symbol “AC”. For further information about Arca Continental, please visit www.arcacontal.com

Dallas-based Coca-Cola Southwest Beverages (CCSWB), a company of Arca Continental, is one of the largest Coca-Cola bottlers in the United States. CCSWB produces, markets and distributes Coca-Cola brands throughout Texas and parts of New Mexico, Oklahoma and Arkansas. The company employs more than 8,900 associates who operate 10 production plants and 40 distribution facilities, serving more than 31 million consumers. For more information about Coca-Cola Southwest Beverages, please visit www.cocacolaswb.com